Ready to Visit Los Angeles? Here’s What You Need to Do While There 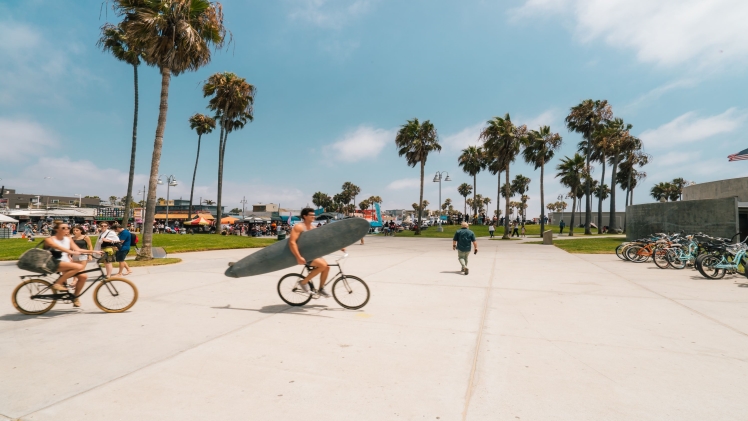 Los Angeles is perhaps the most famous city on the West Coast of America. Known for its glitz and glam, the Hollywood scene is worldwide a popular draw for those looking to make it on the big screen. But there is so much to do in Los Angeles that will appeal to anyone, even those who might not be star-struck.

If you’re ready to visit Los Angeles here’s what you need to do while there.

If Los Angeles, the city, is glitz and glam then Venice Beach is the rebellious sibling. This area of the seaside metropolis is anything but showy and is best known for the bohemian spirit that surrounds it. You’ll explore the uniquely funky shops as you observe live street performers and artists. Catch a glimpse of tricks at the skate park close by the fitness enthusiasts at what’s appropriately dubbed Muscle Beach for the outdoor gym. But before you leave this truly one-of-a-kind destination be sure to catch a wave and surf, either by lesson or rent a board.

One of the best parts about Los Angeles is the quiet escape of Santa Monica. Although not quite so distant, it’s less hustle and bustle than the main city itself. Along this beachside town explore the historic Santa Monica Pier. It’s a double-jointed pier built in 1909, and holds claim to the first concrete pier built on the West Coast. There you’ll find a just-big-enough amusement park, concession stands, fishing areas, and, of course, ocean views. It’s great for all types of outings—family, friends, dates. There’s also restaurants to choose from where you can dine.

Take a drive through Beverly Hills

You’ve likely seen it in movies, but now it’s time to do it for yourself. Take a drive through the scenic area of Beverly Hills. If you want to really feel part of the scene, rent a convertible car and drive with the top down—the sunny Los Angeles weather calls for it. You’ll see the streets lined with neck-turning, tall palm trees, storefronts, celebrities, and more. Some of the best drives in Beverly Hills include Beverly Gardens Park, Sunset Boulevard, Baldwin Hills Scenic Overlook, Greystone Mansion and Gardens, Mulholland Drive, Rodeo Drive (for some of the world’s most expensive shopping). If you’re with someone, take turns as one person drives and then switch off to really be able to stop and stare for as long as you need.

See your favorite names on the Hollywood Walk of Fame

You’ll immediately feel welcomed to Hollywood when you walk down the world-known pathway of the Walk of Fame. It’s located on Hollywood Boulevard between Gower to La Brea and on Vine Street from Sunset to Yucca (and it continues to grow). The walk is something to marvel at as there are over 2,700 names of stars that line the walk—with more being added. If you look at the website before you go, you might even be able to attend a live ceremony of a newly added name. Stroll along and take a photo of some of your favorite names knowing that at one point in time they were right where you’re standing, accepting the award.

Head to the Griffith Observatory

The Griffith Observatory is an iconic building on the hills of Los Angeles that inspires the public to view the stars through its enormous dome. The 67,000-square-foot building is right on the southern slope of Mount Hollywood, at 1,134 feet above sea level. Not only is it free to go, because it’s operated by the City of Los Angeles Department of Recreation and Parks but it’s situated in a beautiful park of its own.

While there, explore Griffith Park

Griffith Park, where the Griffith Observatory dome can be seen, is at the center of Los Angeles. Its 4,000 square-acreage is breathtaking to nature lovers and hikers. There are trails, wildlife, and unbeatable views of the downtown area. This area is great for fitness enthusiasts of all levels. So, walk, hike, or run your way through the hills.

Perhaps what Los Angeles is most famous for is the Hollywood Sign. Build on a hill in the Hollywood area (appropriately so) it can be seen from distances near and far. If you’re interested in a hike, you can hike your way near it. But be aware that it is illegal to climb or touch the sign itself, so it’s blocked off. However, fortunately, you can still a great many perfect shots of it from down the hill all around the streets.

With so much to do and see if the city of stars, you don’t want to be weighed down by your baggage. A pro tip is to look for luggage storage LAX area so that you can place your possessions somewhere safe while you take in all that Los Angeles has to offer. Whether it’s your layover, and you’re simply seeking a few hours to explore, or there just isn’t any room in that tiny Airbnb you booked, you’ll find a place for all of your belongings.

What to Do if You Lost Your Documents in Somalia